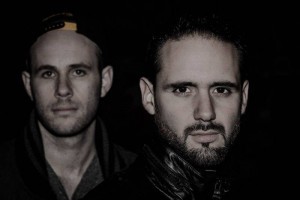 The Checkup return to Large with Move Me after smashing the sales charts with their debut release in 2014. This follow up release confirms that all the buzz about these two professionally trained musicians from Belgium is truly warranted. We sat down with Alex and Raphael and spoke about a variety of topics. Here is the full interview:

1) Guys, congratulations on all of your recent success! One of the traits that sets you apart from other producers is your musicianship. Can you tell us about your background and training?
Alex: Thanks a lot ! So I began music school at 8 where I learned classical piano first and then some jazz piano and bass guitar. But my favorite class was harmony. Raph is a drummer and saxophone player. We both studied music and played in bands (Raph even played in big bands !) before heading to electronic music.

2) How did you guys meet up? Was there always a plan to form The Checkup or did it just happen naturally from spending time together?

Raph: We met through our mutual friend’s record label since we both had released on there with our solo projects. One day we met at a party in Brussels, and I had been supporting Alex’s tracks for a while now and really loved what he did, so we thought about maybe collaborating for the fun of it. Turns out we clicked really well and decided to create a project together. So it happened naturally yes!.

3) Is proper House Music your first love or do either of you experiment with other genres and styles of dance music?
Raph: I was very much into all sorts of Rock when I was younger. I played the drums in many Rock bands throughout my teens. I also love Jazz and blues as I have played the saxophone since I was 8 years old. My favorite music to listen to now though is probably Disco and Funk:) In terms of production, I played around with Techno, Tech House, Deep House and finally found what i loved the most, proper House music!
Alex: Hehe, i love that one. My parents listened to a lot of Jazz, Funk, Blues and Disco, so that got to my ears really early. My favorite band was (and still is) Jamiroquai so I listened to a lot of Acid Jazz (don’t ask where my love for min7 chords come from) before listening to Jazz, Pop and Rock stuff. I played in some Electro Funk, Nu Soul, Alternative Rock and Electro Pop bands before going all in for UK House and Deep House, which I discovered back in 1996.

4) Can you tell your fans how the relationship with Large Music came about? It seems like a great fit.
Raph: Well we had finished our “In Your Soul” EP and were looking for a home for it. A friend of ours told us that Large would love it, so we sent it out. The response was so positive and honest that we directly knew the relationship would be great. We really think that this collaboration with Large was meant to be, it really feels right! We already have a strong bond and feel like its our home for sure.

5) One of the most exciting events surrounding your debut ep on Large last year was how strong the response was on Spotify. You have over 300,000 plays already! How do you feel about the recent debate about streaming verses owning music?
Alex: we feel alright about streaming. Actually, we really love that people can enjoy any kind and amount of music for a small monthly fee, or even no money at all. Spotify, Youtube, Netflix or any “all you can watch / listen / read” model has become the way to go for many people and we think it’s good that way. It’s a great opportunity to showcase what we do for next to nothing and is a nice incentive for people to come to our gigs and enjoy the music with us.

6) Can you tell us about your DJ sets? You recently posted a preview of a “live” program. How are you going to integrate live elements into your playlist?
Raph: We like to tell a story in our Dj Sets. Kind of start low and end very high, but with variations throughout the set…let the people breath a little, and give them a lot of harmony and soul for the good vibes. We quite like the groovy, soulful banging stuff…But we mostly play between Deep House / Uk House and sometimes Tech House if it gets late and we feel the crowd wants to fist pump a bit more.
Having said that, we are more aiming to play live so we can play our own music and give versions that no-one has heard before! Alex: We wanted our live to be different in its form and essence from the releases, more clubby and without limitations. So we went through every single track we did the past year (including released and unreleased material) and we worked on two axis : first one was to strip down tracks to their essential parts. Then, re-use some elements and remix ourselves. The result is that we have every building block we need in Ableton Live, but no preset structure or even tracklist. We can mix and match beats, stabs and vocals from 3 different tracks for example. Add on top of that Raph beating his drum pads for some Tech House vibes and effects, and myself playing piano or Rhodes to reinterpret harmonies or solos, and you get every single night a performance that is totally unique.

7) What are your goals and plans for the rest of 2015?
Raph: We wanna share our music with party people as much as we can by having a good time in clubs, performing our music live. It’s okay if we don’t see our homes at all, any airport (or 5 stars hotel for that matter) will do! Our Live set is ready with about 20+ live tracks and we are pumped with energy to get the ball rolling. We have some unreleased material still that will come out in 2015 and we will also produce some new stuff later on this year. We are feeling 2015 pretty well and cannot wait for it to start!