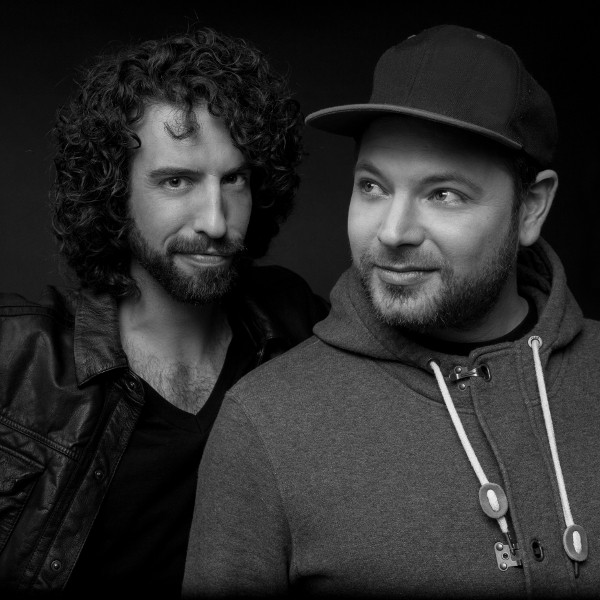 Deeligent Soul is the brainchild of Arnaud and Seb, two very talented veteran djs and producers who have been mainstays in the Brussels, Belgium nightlife scene for over 14 years. In our relentless search for new and exciting music, we knew after only a few listens to their demo reel that they would be a great addition to the Large Music artist team. We sat down recently with them to have a proper chat with these two talented artists:

1) First and foremost, welcome to the Large Music family guys. Can you tell us how you each discovered House Music?

Seb: My pleasure. Thanks a lot for having us on board! I was very young when I discovered House Music. When I was 12 years old, I received my first vinyls which were Reese & Santonio Rock to the Beat & Rickster Night Moves. All thanks to my mother who was working in radio broadcasting. At that time, new beat and acid house were very strong here in Belgium. I was fascinated by that music and I played for hours with my father’s TB 303. I then learned how to recreate those drum patterns with an Atari and Cubase using MIDI. My interest for house music has never left me since.

Arnaud: My pleasure too! Being welcomed in Large Music’s family really makes us feel like kids in a toy store. Concerning your question, I have always been involved into the music. I discovered House Music by the radio and the underground House Music back in 1999 on a school trip to London. As we were there, I wanted to hear what they had in stores as I already was a DJ… Well, kind of a revolution to my ears!

Since then, House Music never left my heart…In all its forms as you are going to discover in our forthcoming releases and podcasts.

2) Were you both DJs first or have you always been involved in production?

Seb: I was involved in production first. After making beats of all types I began to produce deep house music together with a friend I met in High School. We were hanging out each week at his studio and and we came out with several deep & funk-house tracks that were played by local DJs and broadcasted on a Belgian house music radio show.

I began DJ’ing seriously when I moved to Barcelona for 5 years after my graduation in 2002 and there i found my first job as resident DJ in a beach club. This led for me to also play gigs in underground parties around.

When I came back to Brussels, I started collecting synthesizers to complete my home studio and I began to compose tons of raw beats & tracks for the hell of it. I released a first Jazzy House track as Deeleegenz before meeting Arnaud. We spent more and more time in the studio and the feeling grew as well as the sound.

The result is Deeligent Soul.

Arnaud: First I was a DJ and I have been for a very long time. I did some remixes a few years ago but I didn’t find a real interest in producing. I was a DJ and I loved it, digging the shops to find the tracks that moved the crowd… It became more than a hobby and i called my podcasts “Fresh ‘n’ Groovy”.

3 years ago, I became A&R at Electronical Reeds and I met Seb as Deeleegenz… I had not seen him in a long time but that subject is for another time I guess (laughs).

Coming back to this one, we met in the studio, listened to tracks and naturally began to discuss ideas, production ideas. It enabled me to find a real connection with the production and we began to make our first tracks together as Souldust & Deeleegenz. It rapidly became very obvious that we wanted to continue and go to the next level and Deeligent Soul was born!

3) Have you both known each other a long time? When did you first start producing or DJ’ing together?

The very first time we met was back in school. Arnaud was studying Sound Engineering and Seb was studying Multimedia production and Film Editing.

We had a common friend (Alex, half of The Checkup) that introduced us to each other. One point was made clear…we all loved (and still love) House Music, each with our very own style.

We met again last year when Seb and I released tracks on Electronical Reeds. There came ideas together and we also started to dj at that time. We rapidly felt that this was only the beginning!

4) Deeligent Soul is a very unique name. Can you tell us how that moniker came about?

As we told you before, we started separately, so we both had our artists names and identity, Souldust & Deeleegenz. And we wanted to keep a bit of those in our duo name. It is a friend that came up with the name Deeligent Soul which is exactly who we are. After 15 years into the music, we can say we are diligent!

That is why we transformed Diligent into Deeligent, which is a part of Deeleegenz and we added Soul, which is a part of Souldust and also because we do put that one in what we do and our vision of what we create is to produce music that moves both body and soul!!

5) You both are very active in the underground club scene of Brussels. How do you define your scene and is there a good deal of dance music history in the city?

Arnaud: We certainly have an history with the electronic music in Brussels and in Belgium, that is undeniable. Nowadays, the scene is changing a lot, new clubs or parties are coming to life, old ones change their artistic direction, other have more difficulties than before to be as full as they were. I’d say it is changing and I’m really curious to see in which direction it is going.

Seb: Brussels make me feel like Arnaud just said. We clearly have a clubbing history and today a lot is changing. Really looking forward to where it is going to be.

6) Finally, if you could pick one favorite track or release from the vast Large Music catalog what would it be?

Seb: Very hard task to choose one and only favorite track ! If there is no prescription, I’ll go for “Ulysses I’m Leaving You” back in 93. I love the vocals, the vibe. Such a great house classic and reminds me of the first house tapes I ever listened to.

Arnaud: Wow, from the vast Large Music catalog, I think i will go with Unconditional Love (Deep Mix) by Dennis Ferrer. I’ve played that track a dozen times! But I have to add In Your Soul by The Checkup, not because they are my friends but because that is right where the track is, in my soul. I play it almost every time!

Stream Colours of the Sunset now on Apple Music